Home Uncategorized This is what Bitcoin, Ethereum prices need for an explosive rally after...


The release of the latest US Producer Price Index (PPI) data, which measures factory-gate price inflation, could have a significant impact on Bitcoin, Ethereum and other cryptocurrencies when it is released at 13:30 GMT on Wednesday, January 18. The econometric indicator looks like this. Because it measures the cost of goods after production, or the “wholesale” price, it is an indicator of more general consumer price inflation.

Will US Producer Price Index Track US CPI?

Following the release of US Consumer Price Index (CPI) data on January 12, Bitcoin and Ethereum prices witnessed a recovery after an unexpected month-on-month (MoM) decline of -0.1% in December. The data caused the US Dollar to fall and risk assets, including many leading cryptocurrencies, to rise. That reversed losses from the FTX exchange collapse and the DCG-Gemini scandal that have rocked the sector since November.

The question is, will the same thing happen when the US PPI is released today? And what implications does data have for cryptocurrencies?

US PPI and CPI by Year

The impact of PPI on the US Dollar and cryptocurrencies

The US Producer Price Index for December is expected to be 6.8% year-on-year and -0.1% month-on-month, according to a survey of economists.

The biggest impact on the US Dollar and cryptocurrencies will result from an unexpected increase in the PPI. This is because market expectations are leaning towards lower inflation expectations, especially after the Consumer Price Index showed an unexpected decline in the same month in December, so a rise would surprise the market. 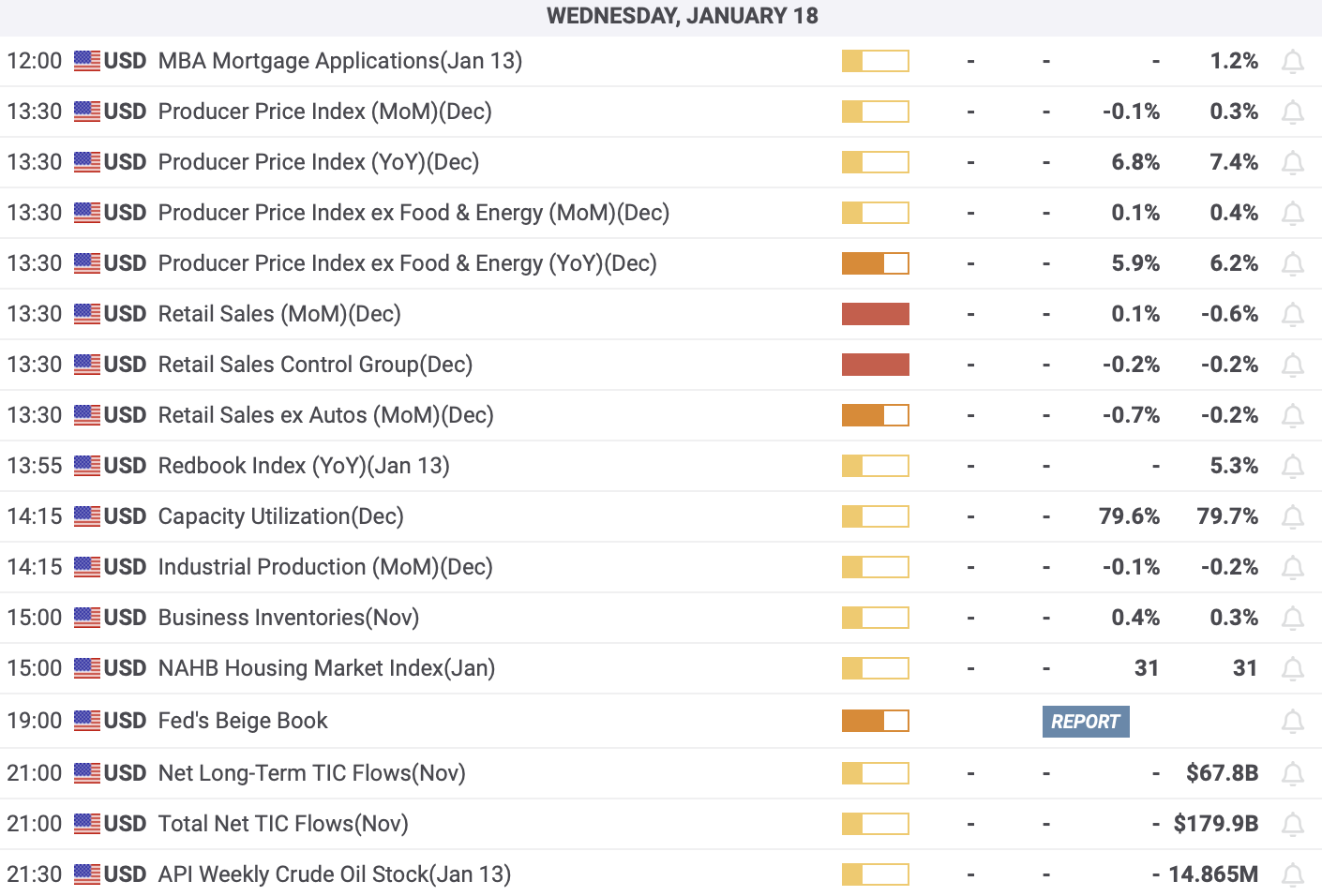 Important US economic data is expected to be released on Wednesday

And the US Producer Price Index reading was significantly higher than consensus (more than 0.1% MoM or 0.2%) this could result in a significant increase in the US Dollar and a decrease in the prices of Bitcoin and other cryptocurrencies. This is because it will mean that the US Federal Reserve (FED) may have to continue aggressive interest rate hikes to curb inflation, which will support the US Dollar, which has an inverse correlation with cryptocurrencies (since they are denominated in US dollars).

If PPI data meets consensus expectationsasset prices are likely to remain unaffected, although there may be a slight positive effect on the US Dollar and a negative effect on cryptocurrencies, as official survey expectations are now somewhat outdated and do not take into account recent data. such as the below-expected CPI data released six days ago on January 12.

Lower than expected resultespecially if it is greater than the 0.1% difference seen in the CPI release, it will likely result in a fall in the value of the US Dollar and a rally in the prices of Bitcoin, Ethereum and many other altcoins.

What does the Bitcoin chart say before the release?

Bitcoin price rose sharply in January 2023 after falling to new lows following the FTX crisis last November. The leading cryptocurrency rose from $15,479 on November 21 to $21,594 on Tuesday, January 17 (yesterday).

Following the critical November 5 break above $21,473 achieved this week, there are signs that the short-to-medium trend for Bitcoin is changing after BTC made a low before bottoming out. This breakout is a key sign that the broader downtrend may be reversing. 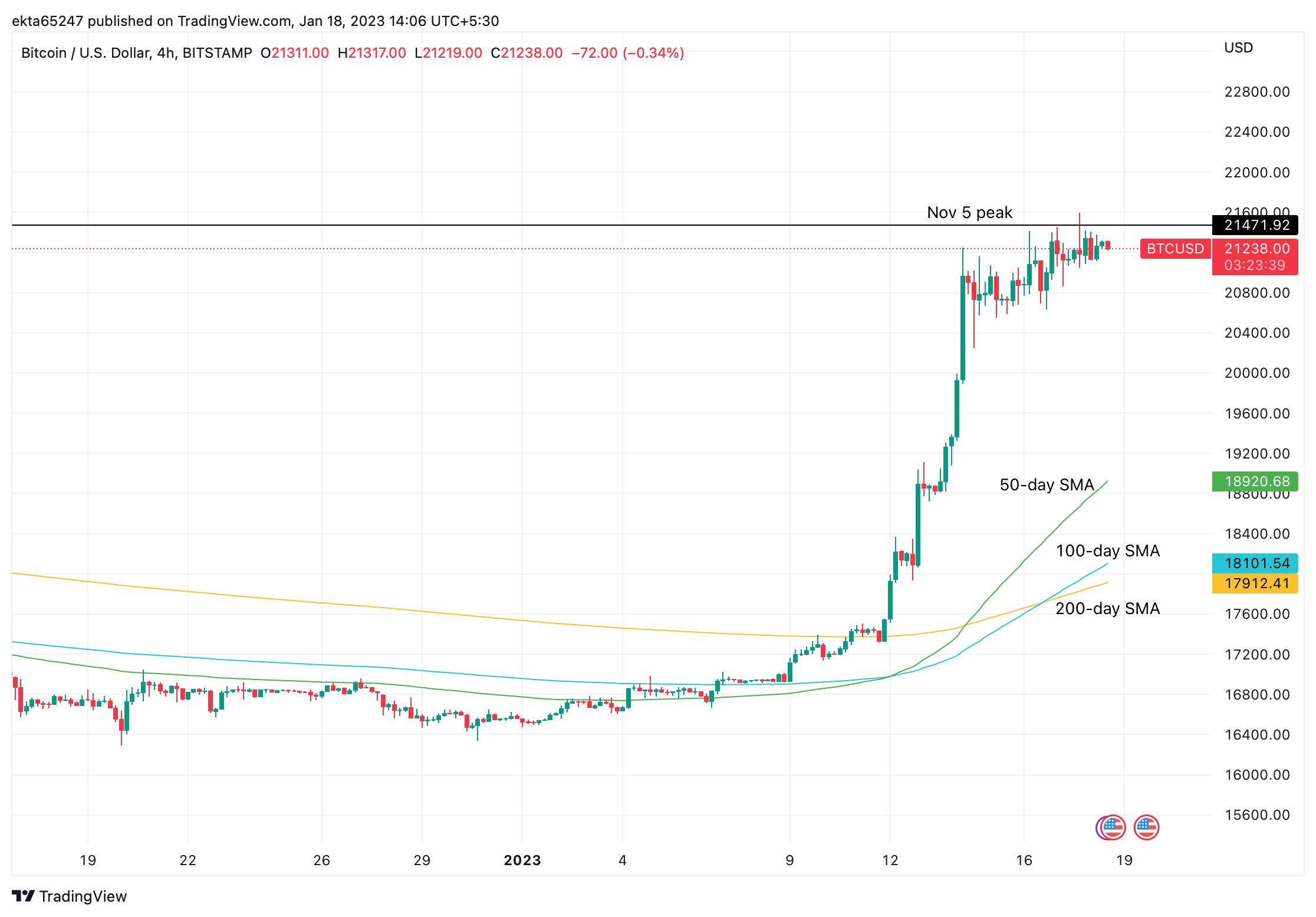 On the way up in January, Bitcoin price broke through all the major moving averages: the 50-, 100-, and 200-day Simple Moving Averages (SMA), indicating that it may be reversing its longer-term downtrend.

However, BTC is overbought according to the Relative Strength Index (RSI), which is currently well above 70 on the daily chart. The RSI can remain overbought for a while before the market starts to pull back, and according to market technician Welles Wilder, who developed the indicator, a firm signal to sell can be issued not until it breaks out of overbought and re-enters neutral territory below 70. Although overbought, Wilder advised traders not to add long. On the 4-hour chart above, however, the RSI has already fallen below 70, giving traders a sell signal and suggesting a possible pullback during this time frame.

Therefore, a lower-than-expected or better-than-expected PPI would certainly be in line with the bullish narrative on the charts, but given that the asset is already overbought, it may have no impact or may even be slightly lower. if the data continues to show long-term inflation. Prices rarely go up in a straight line, and the BTC price is definitely in for a bit of a correction.